A simulation of the downward current region of the aurora.

This movie shows the plasma potential and phase space densities for electrons and protons of ionospheric origin. The equatorial magnetosphere is on the left-hand side of the figure, and the ionosphere is on the right-hand side. This simulation of the downward current region was published published by H. Gunell, et al. (Annales Geophysicae, vol. 33, 1331-1342, 2015, doi:10.5194/angeo-33-1331-2015).

Computer simulation in plasma physics
Simply put, in order to simulate the behaviour of a plasma one computes the charge and current densities from the particle positions and velocities; from the charge and current densities one computes the electric and magnetic fields; then one computes how the particles move subject to these fields, resulting in new particle positions and velocities. By repeating these few steps over and over one can follow how the plasma develops in time.
It is usually impossible to follow the motion of every particle, because they come in such large numbers. Instead many different methods have been developed, one of which is Vlasov simulations. In Vlasov simulations, the particle populations are represented by their distribution function, which describes how many particles there are at a certain position and a certain velocity. This has been used to study the acceleration of the electrons that cause the aurora.
The same computer simulation program that was used to produce the figure below has also been used investigate the possibility of constructing a laboratory experiment that simulates auroral acceleration processes. The simulation program can be downloaded from the software page. 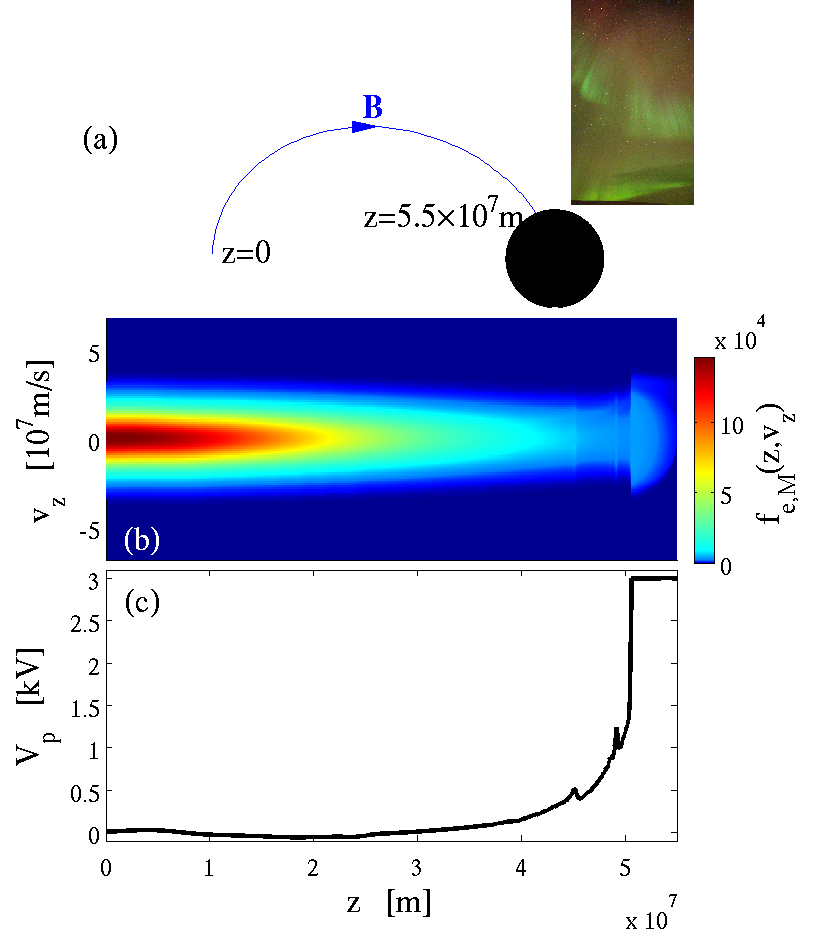 (a) Schematic of an auroral field line between the equatorial magnetosphere and the ionosphere; (b) colour coded distribution function of electrons from the magnetosphere in a Vlasov simulation; (c) electric potential in that same simulation.