The earth's magnetopause
The magnetopause forms as an equilibrium between the solar wind's dynamic pressure and the magnetic pressure of the earth's magnetic field. The magnetopause is an obstacle to the solar wind flow, and the bulk of the solar wind flows around it. However, the dayside magnetosphere is not empty. Plasma can be convected from the nightside to the dayside or it can penetrate through the magnetopause directly on the dayside, as plasmoids with higher momentum density than the surrounding magnetosheath plasma collide with the magnetopause. This was suggested by Lemaire (Planet. Space Sci. vol. 25, 887-890, 1977) and confirmed recently using data from the Cluster spacecraft ( Gunell et al. 2012, Phys. Plasmas, vol. 19, 072906 (2012)) This phenomenon has also been studied in laboratory experiments and computer simulations (c.f. the magnetic barriers page). 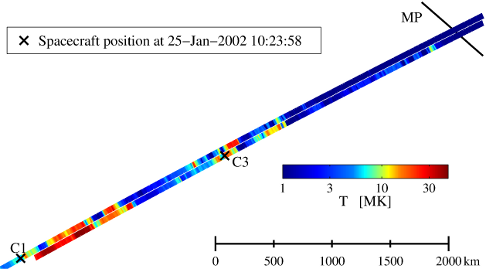 Two of the Cluster spacecraft measuring the ion temperature to show that low temperature magnetosheath plasma penetrates the magnetopause.